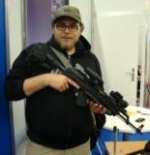 G&P Custom Magpul Masada (Fully Licensed Based on A&K) - Black
G&P has custom built this A&K Masada (Black) from the ground up with it's own internal mechanism and gearbox.

Please note that some versions of the G&P custom Masada include a fake Noveske flash hider, which is an illegal and unlicensed version. RedWolf only carries the fully licensed legal version of this G&P custom.

Fully licensed from MAGPUL, the G&P custom Masada is well balanced and solidly built for the money. Nicely textured plastic on the lower receiver and rear stock, the grips and butt stock are properly textured for maximum grip. The functional metal bolt cover locks back when you pull back on the charging handle. To release it, simply use your index finger to push down on the bolt release for the bolt cover to fly forward with a loud "flap" sound. CNC aluminum upper receiver adds weight and realism with RIS rail for attaching the included spring loaded rear flip up sight.

The rear stock is fully adjustable, and can be folded, extended (7 positions) and the cheek piece lifted (held in place by friction so more for looks than a real functional feature). Ambidextrous magazine release button so it can be accessed from both sides. Metal flip up front sight with elevation and windage adjustment. Full metal barrel with 14mm clockwise thread for attachment of silencer (sold separately). Mini 8.4v battery is stored in the front grip. Unique user adjustable barrel lock system ensures that the front end stays tightly on the gun with no barrel wobble. Adjustable hop-up accessible when bolt cover pulled back. Shoots 350fps as tested in our labs.!

This G&P version comes with TWO magazines - a high capacity 300 round PMAG, and a traditional 68 round M16 metal magazine.